When you need to ensure that server responses always return through the BIG system, or when you want to hide the source addresses of server-initiated requests from external devices, you can implement a SNAT. A secure network address translation (SNAT) is a BIG-IP® Local Traffic ManagerTM feature that translates the source IP address within a connection to a BIG-IP system IP address that you define. The destination node then uses that new source address as its destination address when responding to the request. For inbound connections, that is, connections initiated by a client node, SNATs ensure that server nodes always send responses back through the BIG-IP system, when the servers default route would not normally do so. Because a SNAT causes the server to send the response back through the BIG-IP system, the client sees that the response came from the address to which the client sent the request, and consequently accepts the response.
For outbound connections, that is, connections initiated by a server node, SNATs ensure that the internal IP address of the server node remains hidden to an external host when the server initiates a connection to that host.

However, there are atypical network configurations in which the standard BIG-IP system address translation sequence by itself does not ensure that server responses use the required return path. Examples of these atypical configurations are:

When an internal server initiates a connection to an external host, a SNAT can translate the private, source IP addresses of one or more servers within the outgoing connection to a single, publicly-routable address. The external destination host can then use this public address as a destination address when sending the response. In this way, the private class IP addresses of the internal nodes remain hidden from the external host.
More specifically, a SNAT for an outgoing connection works in the following way:
1.Local Traffic Manager receives a packet from an original IP address (that is, an internal server with a private IP address) and checks to see if that source address is defined in a SNAT.
2.If the original IP address is defined in a SNAT, Local Traffic Manager changes that source IP address to the translation address defined in the SNAT.
3.Local Traffic Manager then sends the packet, with the SNAT translation address as the source address, to the destination host.

The types of SNATs you can create are:

From the picture you can see that you can access address translation via the LTM menu. Then there are couple of sections: 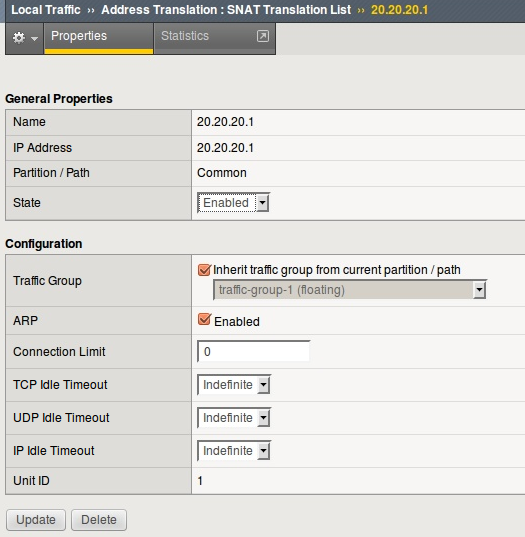