In high level we can say that FC is protocol that replaces SCSI disk cable with a network. The host machine thinks the disk is locally connected with SCSI cable but it is not, the disk is accessed via SAN network through the FC protocol.

So we moved from this 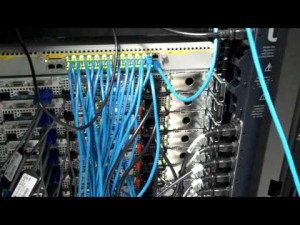 FibreChannel is just protocol stack same like TCP/IP, primarily used to send SCSI commands over the network. In network world we have IEEE standards. In SAN world there is InterNational Comittee for Information Technology Standards (INCITS). For the FC there is explicitly the „T11“ standard. For example for FCoE there is T11 FC-BB-5 standard. However you see there are some standards it is not like in the Network world that network devices more or less operates between each other. Here in SAN world there are lots of issues between different vendors and operability between them. They are using different names to describe same thing, like port types in SAN. So the terminology can be little bit confusing.

There is one vague model mappings between FC and OSI. FC0-1 is dealing with the physical layer, for example coding/decoding for 1/2/4 gig etc… FC2-4 is for upper layers. For us is most important the FCP (Fiber Channel Protocol) which we can think of this as analogue to TCP. FCP carry our read/write commands over the network. It works same like TCP/IP stack. So when OS wants to write/read something from the disk, the request is sent to HBA. HBA uses FCP to send this commands over the network encapsulating the FCP from UP to Bottom (like in TCP stack) 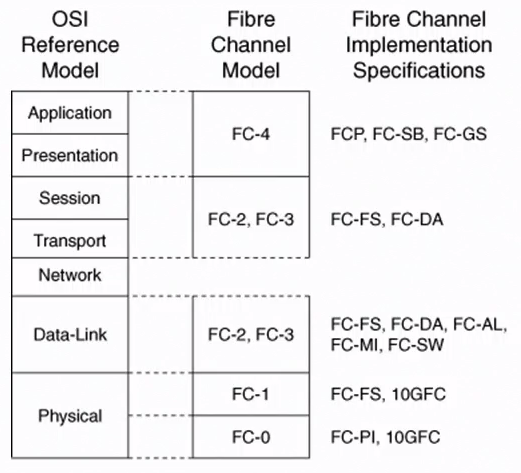 FC addressing is analogous to IP over Ethernet. IP addresses are logical and manually assigned, MAC addresses are physical and burned in.

In FC there are these types of addresses:

FC does not use flooding to build a topology like Ethernet does. In Ethernet, the switches build topology in data plane learning source mac addresses when traffic goes through the switch and flooding when there is no destination. In FC there is no such concept. In FC the end node must go through the control plane process – fabric login process.

Fabric Shortest Path First (FSPF) is used to route the traffic between switches. We can think of this as OSPF, it uses the same Djisktras algorithm in background. So when you look into the CLI for same verification, it would be same logic as in OSPF. Node ID in the Shortest Path Tree is the Domain ID. Traffic is then routed via lowest path between Domain IDs. So same logic as in OSPF. Configuration wise there is really not much we can do in FSPF, we can do little tweaking like changing cost of the link in order to do ECMP for example.

NOTE that FSPF runs automatically as a Fabric Service. There is not much to configure.

Ethernet networks are connectionless. You just plug in the cable and switches starts learning addresses and you can communicate in L2. In FC it doesnt work like that. FC is connection oriented, you have to ask for permition of Fabric to be allowed to send traffic. The reason for this is that when you plug the HBA into the SAN the HBA doesnt have the FCID to be able to send the traffic. So in case of Ethernet we have our MAC addresses and IP addresses already assigned and our switches are not responsible for giving us the IP address. But in FC we dont have it. We must first register in the control plane of the fabric to be able to send the traffic.

So this is going to be our very fist step when we connect to the fabric to be able to send the traffic, to do the fibre channel logins (FLOGI). Via this process we receive the FCID from the fabric switch. Fiber channel logins has three parts:

FCNS is similar to ARP cache. It keeps all the FCID to WWNN/PN mappings. This is very important as the FCIDs are used for the switching and WWNs are used for FLOGI registration process and zoning. In Ethernet the Routers keeps the ARP cache. NOTE that like Principle Switch election or FSPF the FCNS is a distributed fabric service = doesnt need any configuration. So when the end node goes through the FLOGI process and send the WWNN/PN to the switch and receive the FCID, then the end node register itself in the FCNS telling this is the correlation between my WWPN and FCID and if you want to reach me you have to use this FCID. The FCNS also send to the node during the FLOGI process all the relations it has, all the ARP cache so the node can reach everyone.

So this is all build in feature in Fabric and when I am going through the FLOGI process I automatically go through this process and also automatically know how to reach other nodes in the Fabric. The FCNS (show fcns database) is the one of the common command used in fabric. All devices in particular VSAN are able to see each other in FCNS database. All the storage arrays = all the disks are in this FCNS when they are registered. This is very dangerous, thats why zoning was invented. Now we are using the terminology when FCNS send the mapping to end nodes, that he sends the „zoning info“. Because we are restricting what the FCNS send to end nodes, hence we send zoning info.

Note that when you see the mapping WWN to FCID for specific device in the „show fcns database“ the flogi has been successful. This is because if the flogi is not successfull there is no mapping and then it is not in the FCSNS.

This is something all switches in fabric must agree on. If some switches will have different zoning configured we can run into the problems. By default all initiators learn about all targets during the FLOGI process. This is what the FCNS is doing, it provides to everyone mapping between the physical and logical address. So its like exchanging the ARP cache in Ethernet with everyone in the topology. This is doing the FCNS, it send the physical to logical address mapping of everyone during the FLOGI process so every can reach everyone.

In LAN world this is not really a problem. If some node talks to other node it doesnt corrupt the network. However in storage world this is problem. If for example the windows server mount the unix partition and write something to it, the whole partition is corrupted. So we need to be very careful. And a way how to prevent this is zoning, where you specify what initiators can talk to what targets. You can think of this as IP ACLs. We specify which WWNs, FCIDs, IPs ( in case of iSCIS) can talk to each other. NOTE like FCNS or FSPF is distributed fabric service propagated automatically to all switches. So for example in ethernet world if the vlan ACLs would not match with vlan ACL in other switch there will be some problems with forwarding the traffic – same analogy is in SAN.

Because creating zoning with WWNs or FCIDs are very difficult (they are in hex), the aliases have been created for this. You then refer to the alias in the zoning rules.

There are two types of zoning. Soft zoning and hard zoning. In soft zoning you restrict what mappings FCNS will send to end nodes during the FLOGI process. This is done just in control plane, so you are restricting what the end nodes can see. They now cannot see everything, you are not going to send the whole WWPN to FCID mapping cache but you are restricting it. However if the end node already know the target he can reach it and manually mount the target he is not able to see, because this zoning is not implemented in data plane. Thats why we have also the hard zoning. In hard zoning, everything is the same like in the soft zoning. The FCNS send restricted zoning info to end nodes, but now this is also enforced in data plane. So if someone wants to map target he is not able to see, he is not able to.

Analogy to VLAN/VRF. Traditonally SAN networks were designed as physical separate networks, i.e. SAN islands. Physical separation is costly in terms of CAPEX/OPEX (equipment, power, space, cooling,…). VSANs solve this isolation problem like VLANs solves it in Ethernet. However one of the big differences between VLAN and VSAN is that we dont have any services that are build into the ethernet switches and VLANs. However in SAN there are lots of fabric services build in the switches (FLOGI, FCNS, FSPF, Zoning) so everytime we are creating a VSAN we are creating a copy of Fabric Services (now its similar to VRF). So in case of VSANs they wont be in so big number deployed as are VLANs.

With VSAN the E port now becomes the TE port.

Same like in Ethernet we can create port channels between our switches to increase the redundancy. This is much simpler in SAN to create port channel as you just configure the „channel active“ and thats it. The negation protocol is PCP (Port Channel Protocol) similar to LACP.