Historically, server I/O connectivity to storage, local area networks, and other servers have been accommodated by hardware and software specifically designed and dedicated to the application, each with different traffic characteristics and handling requirements. Server access to storage in enterprises has been largely satisfied by Storage Area Networks (SAN) based on Fibre Channel. Server access to networking devices is almost exclusively satisfied by local networks (LAN) based on Ethernet. Lastly, server-to-server connectivity, or inter-process communication (IPC) for high performance computing (HPC), is being satisfied with InfiniBand. While each of these technologies serves their application needs very well, the specialization results in the need for enterprise servers to support multiple dedicated specialized networks with unique dedicated hardware. All these networks in the data center often require physically redundant backup connections, which compounds the problem and introduces double the amount of NICs, HBAs, and HCAs into the network. Thats why more advanced ethernet controlers and consolidated I/O adapters called converged network adapters (CNAs) have been invented.

Today, the 10GE NIC market is predominately served with stand-alone adapter cards. These cards plug into the PCIe bus expansion slots of a server to provide 10GE connectivity. Mezzanine form-factor NICs are appropriate for server blades that are installed into blade servers. In this case, there is not a standard PCIe slot. The mezzanine is a daughter card with a proprietary connector, size, and power consumption. While the connector is proprietary, the protocol spoken is always PCIe.

In the next couple of years, OEMs will start providing 10GE LAN on Motherboard ( LOM) solutions. LOM solutions implement LAN chipset integrated onto the PC motherboard thus freeing up valuable PCI slots. LOM implementations are less expensive than adapter or mezzanine cards and also implement effective management technologies that require signal transfer directly to the system board. With LOM implementation, 10GE will be pervasive; every server will ship with an on-board 10GE controller. The tipping point for 10GE will come when data centers refresh their environment with the new Intel® Xeon® 5500 class of server products.

Next sections describes most advanced Ethernet Controllers/CNAs from TOP manufacters.

The 82598 was designed to offer outstanding performance and power efficiency, while at the same time providing support for multi- core processors, virtualization, and unifi ed I/O over a broad range of operating systems and virtualization hypervisors. It can be installed in PCIe form-factor cards, or in mezzanine cards or directly on the server motherboard ( LOM).

RSC is stateless offload technology that helps reduce CPU utilization for network processing on the receive side by offloading tasks from the CPU to an RSC-capable network adapter. CPU saturation due to networking-related processing can limit server scalability. This problem in turn reduces the transaction rate, raw throughput, and efficiency. RSC enables an RSC-capable network interface card to do the following:

Intel Flow Director technology put the specific flow for specific packet to correct CORE. Before all flows was handled just by one CORE. Then Microsoft came with their functionality called RSS to distribute flows to other CORES. However the flows were put to wrong CORES, so then the CORES had to exchange the flow.

The NE020 is a PCIe Gen-1-based controller that implements the iWARP protocol on top of hardware TCP engine, enabling an RDMA over Ethernet solution.
iWARP/RDMA enables very low-latency communication for High Performance Computing (HPC) and other ultra-low-latency workloads. 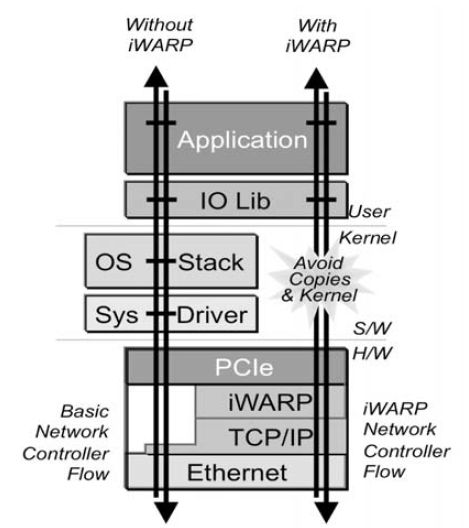 Converged Network Adapters is a term used by some vendors to indicate a newgeneration of consolidated I/O adapters that include features previously present in HBAs, NICs, and HCAs.

Palo is a CNA developed by Cisco® Systems. It is currently supported only on the UCS. When used in conjunction with UCS servers, Palo provides several important system-level features: 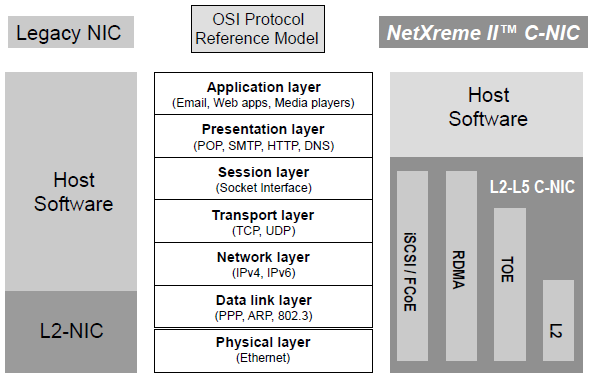 Then there are other Vendors with CNAs like Emulex, QLogic or Broadcom. All more or less supports same feautures, but you better check if it supports what you need (for example VNTag). QLogic is known by market leader NIC in the SAN field. It has the best performance (according to book from 2010).