The UCS 6100 Fabric Interconnects are derived from the hardware of the Nexus 5000 and as such, they can support a variety of network protocols and are capable of acting as Ethernet switches. In the definition of UCS, it became clear that the system is network centric. As such, it can be configured to behave on the Ethernet uplinks either as a group of hosts or as a switch.

The first possibility is to configure FI as Ethernet switches. In this case, the spanning tree protocol needs to be enabled and it detects a loop. This is a suboptimal solution; although it provides high availability, uplink bandwidth is wasted as half the uplinks are not used by traffic as they are in blocking state. To solve this issue, several different techniques can be used like vPC or VSS. I tried to google if FI supports FP but I was not able to find it (2015).

In Ethernet end host mode forwarding is based on server-to-uplink pinning. A given server interface uses a given uplink regardless of the destination it’s trying to reach. Therefore, fabric interconnects don’t learn MAC addresses from external LAN switches, they learn MACs from servers inside the chassis only. The address table is managed so that it only contains MAC addresses of stations connected to Server Ports. Addresses are not learned on frames from network ports; and frames from Server Ports are allowed to be forwarded only when their source addresses have been learned into the switch forwarding table. Frames sourced from stations inside UCS take optimal paths to all destinations (unicast or multicast) inside. If these frames need to leave UCS, they only exit on their pinned network port. Frames received on network ports are filtered, based on various checks, with an overriding requirement that any frame received from outside to UCS must not be forwarded back out of UCS. However fabric interconnects do perform local switching for server to server traffic. This is required because a LAN switch will by default never forward traffic back out the interface it came in on.

Ethernet ports on the fabric interconnects are unconfigured by default. The ports can be configured to be:

In end-host mode, Cisco UCS is an end host to an external Ethernet network. The external LAN sees the Cisco UCS fabric interconnect as an end host with multiple adapters (multiple MAC Addresses).

End-host mode features include:
Server links (vNICs on the blades) are associated with a single uplink port, which may also be a PortChannel. This association process is called pinning, and the selected external interface is called a pinned uplink port. The pinning process can be statically configured when the vNIC is defined or dynamically configured by the system. In end-host mode, pinning is required for traffic flow to a server.
Static pinning should be used in scenarios in which a deterministic path is required. When the target on Fabric Interconnect A goes down, the corresponding failover mechanism of the vNIC goes into effect, and traffic is redirected to the target port on Fabric Interconnect B.
If the pinning is not static, then the vNIC is pinned to an operational uplink port on the same fabric interconnect, and the vNIC failover mechanisms are not invoked until all uplink ports on that fabric interconnect fail. In the absence of Spanning Tree Protocol, the fabric interconnect uses various mechanisms for loop prevention while preserving an active-active topology.

Characteristics of unicast traffic in Cisco UCS include: 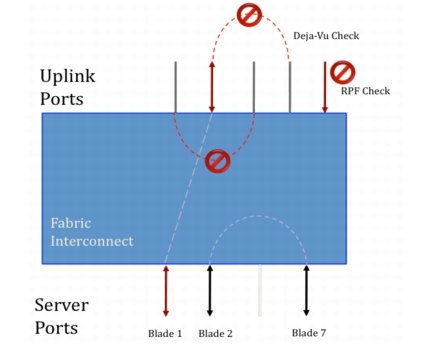 Characteristics of multicast and broadcast traffic in Cisco UCS include:

In end-host mode, Cisco UCS presents an end host to an external Ethernet network; the external LAN sees the Cisco UCS Fabric Interconnect as an end host with multiple adapters. Fabric interconnects running Cisco UCS Manager Release 1.4 or earlier operating in end-host mode follow certain forwarding rules for handling unicast and multicast and broadcast traffic. End-host mode offers these main features:
A single Ethernet uplink port (or PortChannel) on each fabric interconnect is chosen to be the broadcast and multicast traffic receiver for all VLANs, and incoming and broadcast traffic is dropped on the other uplinks. This port is called the G-pinned. G-pin port is the designated interface to receive multicast and broadcast in EHM and is selected by the system randomly and is not configurable. If the G-pinned port goes down, another uplink is designated automatically. To view the elected G-pinned port, use the following commands:

As a result of this behavior, the only network that will operate properly is the network to which the G-pinned port is connected. For example, if the G-pinned port is on the production network, any blade with a virtual network interface card (vNIC) in backup or public VLANs will experience problems. vNICs in those VLANs will not receive any Address Resolution Protocol (ARP) broadcast or multicast traffic from upstream.
For such a network scenario, the recommendation in Cisco UCS Manager Release 1.4 and earlier is to change to switch mode. In switch mode, spanning tree (Per-VLAN Spanning Tree Plus [PVRST+]) is run on uplinks, and broadcast and multicast traffic is handled and forwarded accordingly. Note that in switch mode, fabric interconnects operate like traditional Layer 2 switches, with spanning-tree and MAC address learning enabled on the uplinks.

Server links (vNICs on the blades) are associated with a single uplink port (which may also be a PortChannel). This process is called pinning, and the selected external interface is called a pinned uplink port. The process of pinning can be statically configured (when the vNIC is defined), or dynamically configured by the system.

In Cisco UCS Manager Release 2.0, VLAN membership on uplinks is taken into account during the dynamic pinning process. VLANs assigned to a vNIC are used to find a matching uplink. If all associated VLANs of a vNIC are not found on an uplink, pinning failure will occur.

The Cisco UCS Virtual Interface Card (VIC) or Cisco UCS VIC 1280 is required if a virtualized environment requires individual virtual machines to talk to different upstream Layer 2 domains. Multiple vNICs would need to be created on the service profile in Cisco UCS, and the vNICs need to be assigned to different VMware virtual switches (vSwitches) or have a different uplink port profile assigned to them (Cisco Nexus ® 1000V Switch).

Note: The use of overlapping VLAN numbers in the upstream disjoint networks is not supported.

This consists of running the FC switching software on the Fabric Interconnect and using E_Ports (Inter Switch Links) to connect to the FC backbones. Unfortunately, this implies assigning a FC domain_ID to each UCS and since the number of domain_IDs is typically limited to 64, it is not a scalable solution. Some storage manufacturers support a number of domain that is much smaller than 64 and this further limits the applicability of this solution.

Fabric Interconnect as a Host

This solution is based on a concept that has recently been added to the FC standard and it is known as NPIV (N_Port ID Virtualization): a Fibre Channel facility allowing multiple N_Port IDs (aka FC_IDs) to share a single physical N_Port. The term NPIV is used when this feature is implemented on the host—for example, to allow multiple virtual machines to share the same FC connection. The term NPV (N_Port Virtualization) is used when this feature is implemented in an external switch that aggregates multiple N_Ports into one or more uplinks. A NPV box behaves as an NPIV-based HBA to the core Fibre Channel switches. According to these definitions, each Fabric Interconnect can be configured in NPV mode, i.e.:

This eliminates the scalability issue, since it does not assign a FC domain_ID to each Fabric Interconnect. It also greatly simplifies interoperability, since multivendor interoperability is much better in FC between N_Port and F_Port as opposed to E_Port and E_Port. Finally, it guarantees the same high availability present today in a pure FC installation by fully preserving the dual fabric model. Value added features that can be used in NPV mode are F_Port Trunking and F_Port Channeling: